During the Irish summer months with both warm and wet weather, it means everything around us is growing, including Ragwort.

Ragwort is a common native wildflower (although some say a weed) that grows throughout Ireland and can be dangerous to animals if eaten. It is one of the most common causes of plant poisoning in equines. Ragwort can damage the liver which may result in severe disease and even death.

We are sharing some tips and advice about the dangers of Ragwort if you have large animals such as horses and ponies grazing. Ragwort can be left where there is no animals grazing as it can be extremely beneficial to our already beleaguered wildlife. 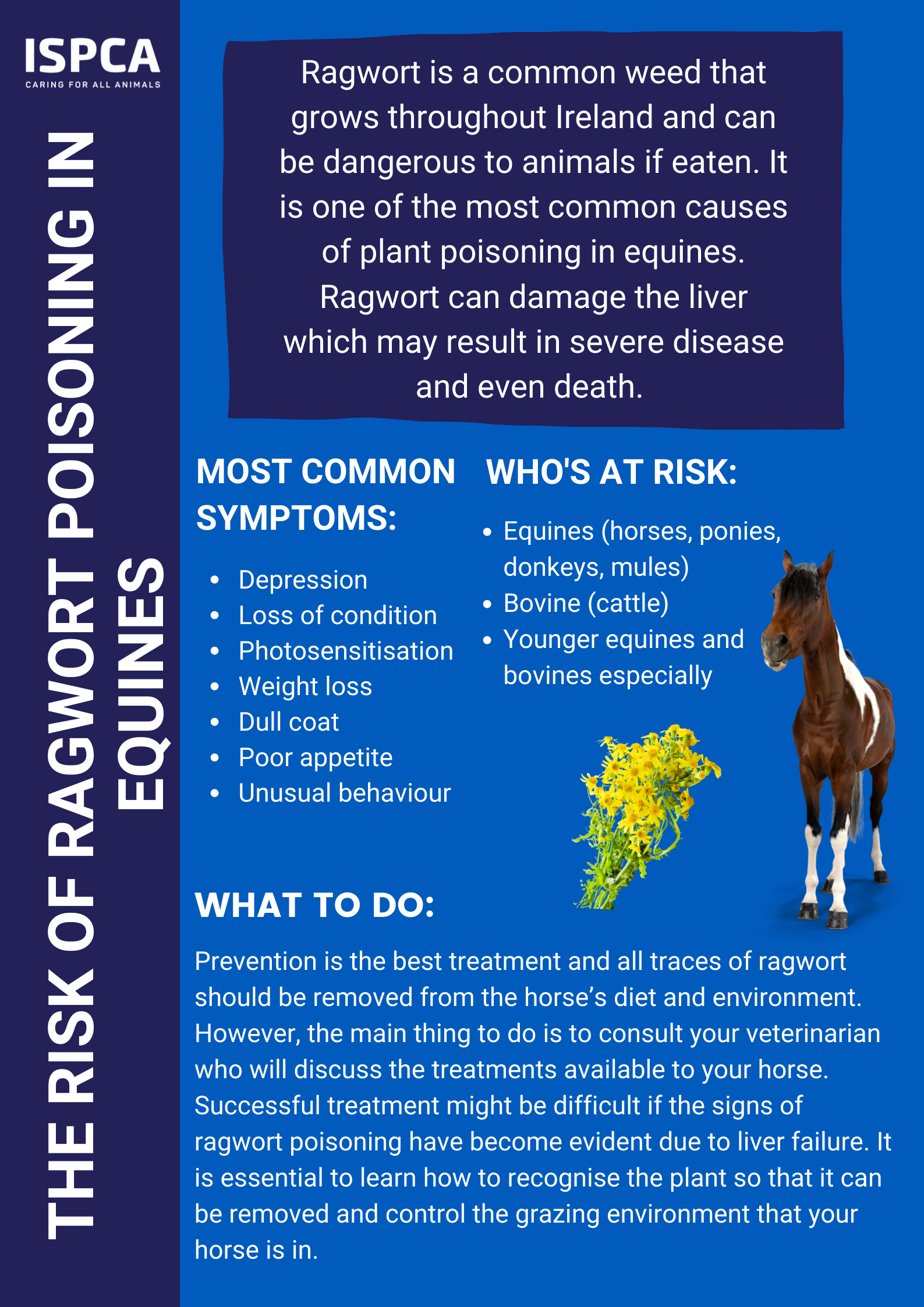 Why is Ragwort dangerous?

Ragwort contains toxins called pyrrolizidine alkaloids. These, in sufficient quantities, can cause liver poisoning in horses and livestock. It is a cumulative poison that eventually leads to the rapid onset of symptoms before death. However, symptoms are variable and resemble those of several other diseases.

The majority of horses won’t eat Ragwort straight away if it is growing among their grazing as it can taste bitter, however, this does not mean they won’t. Horses will also eat Ragwort if nothing else is available. When the plant wilts and dies, it loses its bitter taste and becomes palatable, but, it does not lose any of its toxicity and remains a danger.

Symptoms of Ragwort in Horses:

Unfortunately, the clinical signs of equine ragwort poisoning tend to become apparent when liver failure has already occurred. Some horses or ponies might show some signs of illness initially, but generally, the symptoms tend to develop quite suddenly.

Diagnoses happens through the analyses of blood samples or performing a liver biopsy to see for any signs of liver damage in the horse.

Prevention is the best treatment and all traces of Ragwort should be removed from the horse’s diet and environment. However, the main thing to do is to consult your veterinarian who will discuss the treatments available to your horse. Successful treatment might be difficult if the signs of ragwort poisoning have become evident due to liver failure. It is essential to learn how to recognise the plant so that it can be removed and control the grazing environment that your horse is in.

The only way to safeguard against loss from ragwort poisoning is to eradicate the weed either by pulling, ploughing, cutting or chemical control.

Pulling by hand is recommended where the infestation is not severe and labour is available. Pulling after heavy rainfall when the ground is soft gives the best results, but this should be done before the seed has set. Pulled plants should be removed and destroyed. As the seedling and rosette stages are not usually removed by hand pulling, the operation should be repeated for two consecutive years to achieve satisfactory eradication. We would advise using gloves during the process due to its toxicity.

Ploughing is the most reliable method of control. Ploughing infested grassland and following with a 3 or 4 year rotation of arable cropping before establishing a good ley again is a good option however, this can only be done in areas that can be tilled and where arable farming is practised. Ploughing followed by direct seeding will not be a success unless chemical control (2.4DB or MCPA) of newly germinated Ragwort is carried out in the new ley. Extra care should be taken to prevent the development of seeding Ragwort in new ley.

Cutting the plant before the flowers are open prevents the weed from seeding and spreading, but it is only of limited value unless carried out over a number of years and accompanied by good grassland management.

As Ragwort is able to seed, even after removal from the ground, it should be placed in an enclosed container or secure bag — paper feed bags are best as they can be burnt.

There are three main options for disposing of ragwort safely: controlled burning in small quantities and a safe location away from buildings and animals; rotting in a secure compost bin or similar with a lid; and using a waste-management company who will remove the Ragwort for you.

Further information can be found on the Department of Agriculture, Food and the Marine website on Ragwort and noxious weeds. Read more here.