Today we are launching an appeal with Pedigree Ireland and their Adoption Drive, which is now in it's 6th year. Although there has been a steady increase of dog adoptions, 30 dogs are still abandoned each day in Ireland. 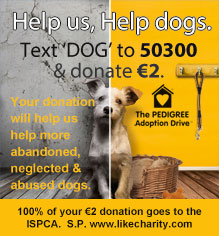 This campaign aims to help raise much needed funds for rescue centres across Ireland.

This year, for every new fan Pedigree Ireland get on their Facebook page, they will donate a bowl of dog food to a re-homing centre. Last year Pedigree Ireland donated €100,000 in cash and food to Irish dog charities.

If you wish to show your support, please text DOG to 50300 to donate €2 with 100% of the donation going to the ISPCA and become a fan of the Pedigree Ireland Facebook page - www.facebook.com/PedigreeIreland

Pedigree Adoption Drive kicks off for its 6thyear

Recent statistics released by the Department of Environment, Community and Local Government have shown that there has been a steady increase in the number of dog adoptions since the Pedigree Adoption Drive first launched 6 years ago,however the statistics also show that on average there are 30 dogs abandoned in Ireland each day – highlighting a major need to help support dog shelters and charities across the country who are under increasing strain to continue their crucial work.

To drive awareness around animal welfare and to encourage more adoptions Pedigree has enlisted the support of TV Presenter Grainne Seoige and Former Boxing World Champion Bernard Dunne, both of whom are proud dog owners. The campaign which launched today will run until the end of May.

Since its introduction six years ago the Pedigree Adoption Drive has gone from strength to strength, helping to raise awareness of animal welfare and in particular highlighting the plight of the thousands of dogs every year who need new loving homes. The drive encourages Irish dog lovers to consider adopting one of the beautiful dogs waiting in their local shelter or welfare organisation. Not only will adopters be helping solve a very real problem which is evident across Ireland but they will also be welcoming a wonderful companion into their lives.

The latest statistics highlight that a big difference is being made. In 2008, a startling 10,094 dogs died in Irish pounds while in 2012 4,500 dogs died in shelters nationwide. While there has been a large reduction over the past six years there is still a long way to go and the Pedigree Adoption Drive continues to drive awareness and fundraise to reduce these harsh figures further.

Speaking about the campaign earlier today, Karen Sorohan of Pedigree said “We are extremely passionate about this programme and are really excited about the positive difference the Pedigree Adoption Drive has made since it started six years ago but are equally aware that more work needs to be done. Last year we were absolutely delighted with the reaction the campaign received and were extremely proud to have been able to make a donation of €100,000 in cash and food to dog shelters all across Ireland.This year promises to be bigger and better than ever with more activities and opportunities for dog lovers to help us help Irish dogs. Our target in 2013 is  to at least match last year’s achievement and we call on all dog lovers to check out our Facebook page or their local store to see how they can get involved and help Irish dogs.”

Once again a key element of the campaignwill see a donation made to help Irish dogs for every pack of Pedigree dog foodbought during the Pedigree Adoption Drive. Throughout the period, dog loverswill be able to participate in a number of fundraising events around Ireland,details of which can be found by becoming a fan of the Pedigree Ireland Facebook page.

The campaign aims to help raise much needed funds for rescue centres nationwide. And this year Pedigree is hoping to match last year’s huge achievements by donating €100,000 in cash and food to Irish dog charities.

Dog lovers across the country will also be able to show their support by becoming a fan of the Pedigree Ireland Facebook page, www.facebook.com/PedigreeIreland.For every new fan, Pedigree will donate a bowl of dog food to a re-homing centre.

In addition this year Pedigree has teamed up with Like Charity and the ISPCA to encourage additional donations via text. Dog lovers across the country can now show their support by texting DOG to 50300 to donate €2 with 100% of the donation going to the ISPCA.

To find out more on dog adoption, from howthe adoption process works, from training to everyday care, visit http://www.facebook.com/PedigreeIreland