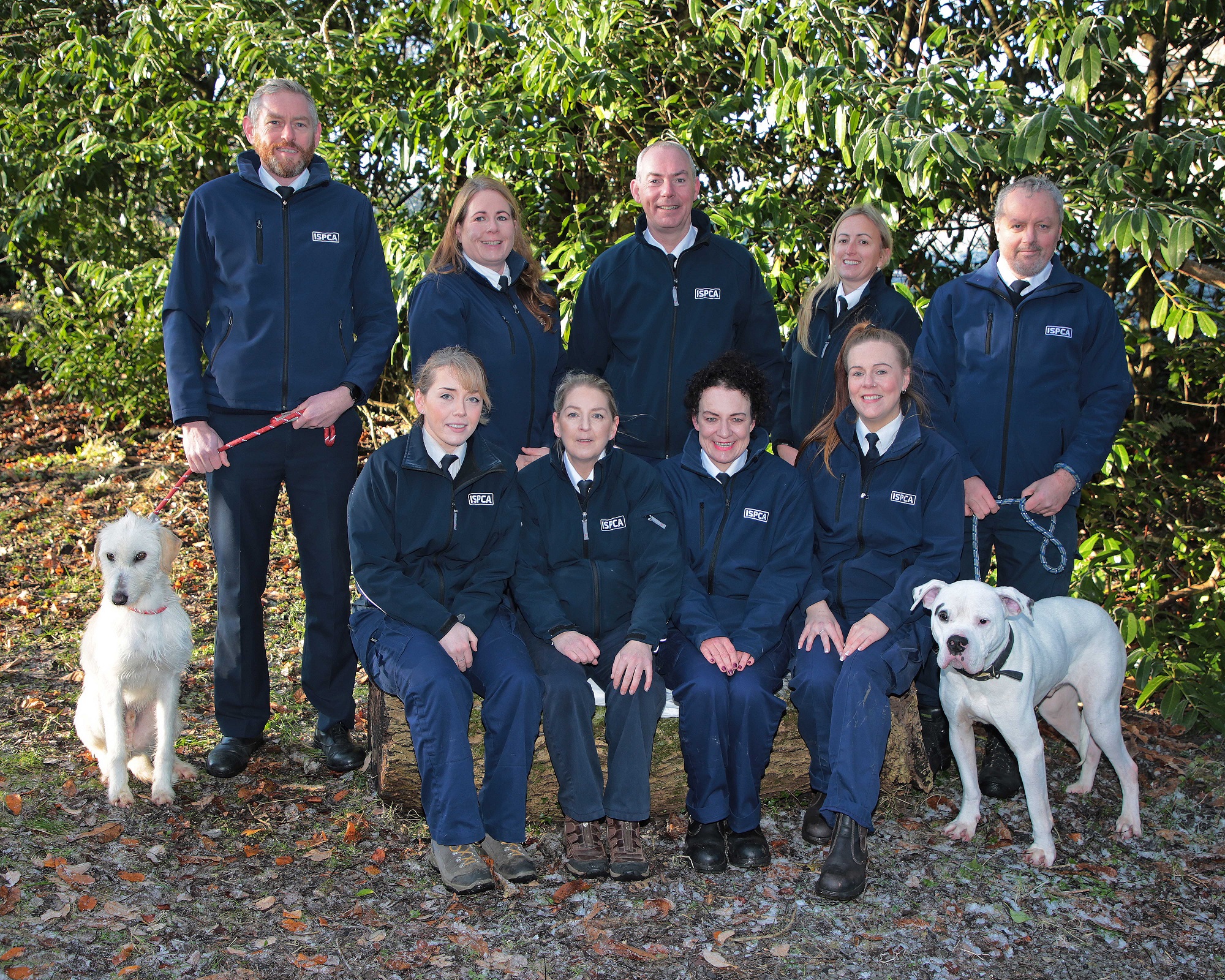 Earlier today, (6th October 2022), Minister for Justice, Helen McEntee TD, launched an awareness raising campaign urging against the misuse of fireworks in collaboration with An Garda Síochána, the ISPCA and Dublin Fire Brigade at Garda Headquarters in the Phoenix Park. 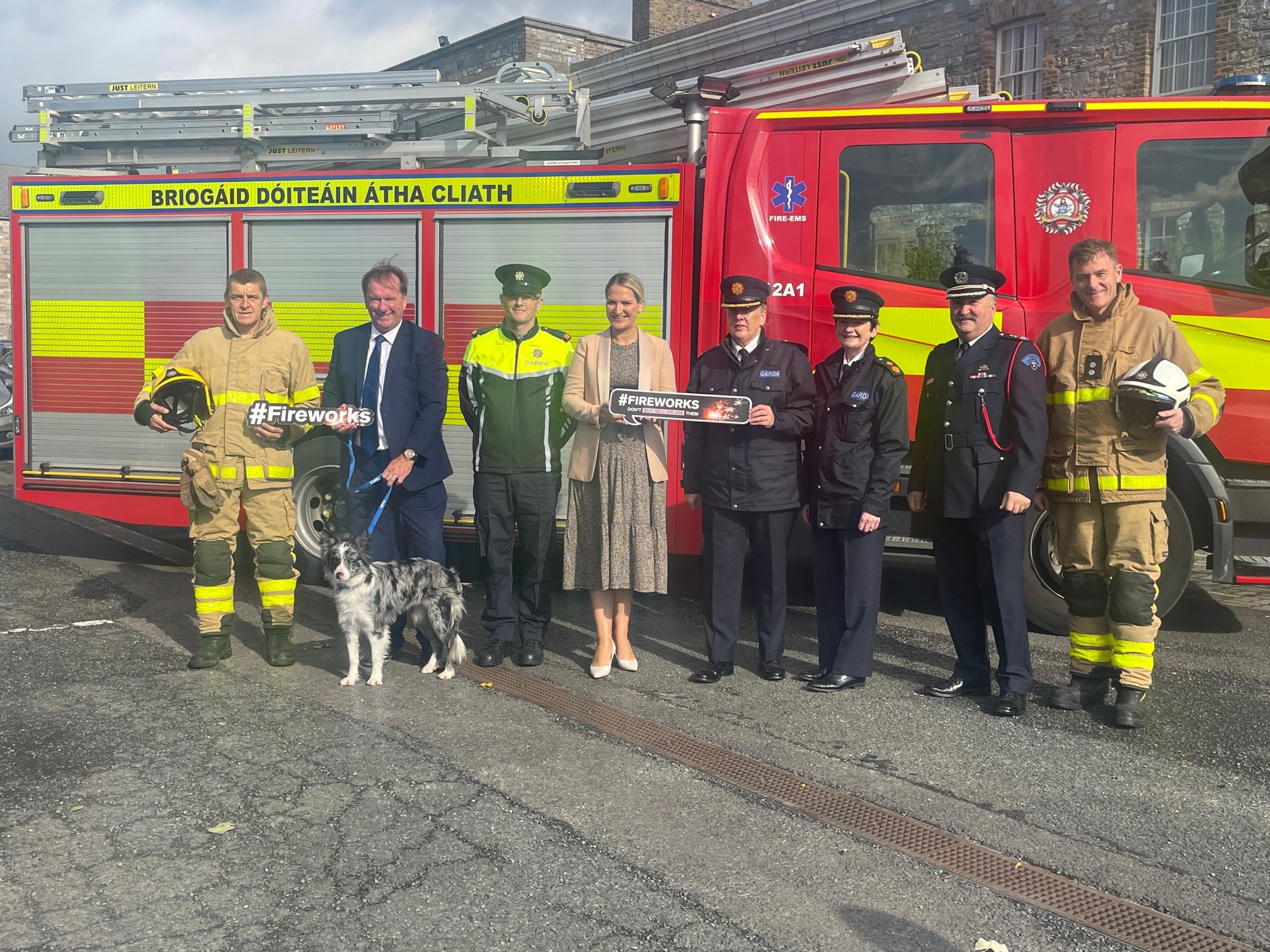 The Department of Justice runs an annual campaign to inform the public about the serious dangers associated with fireworks and the significant penalties that people face for selling or using illegal fireworks.

The ISPCA was delighted to be invited to attend the launch today to highlight the negative impact of illegal fireworks on animal welfare throughout Ireland. 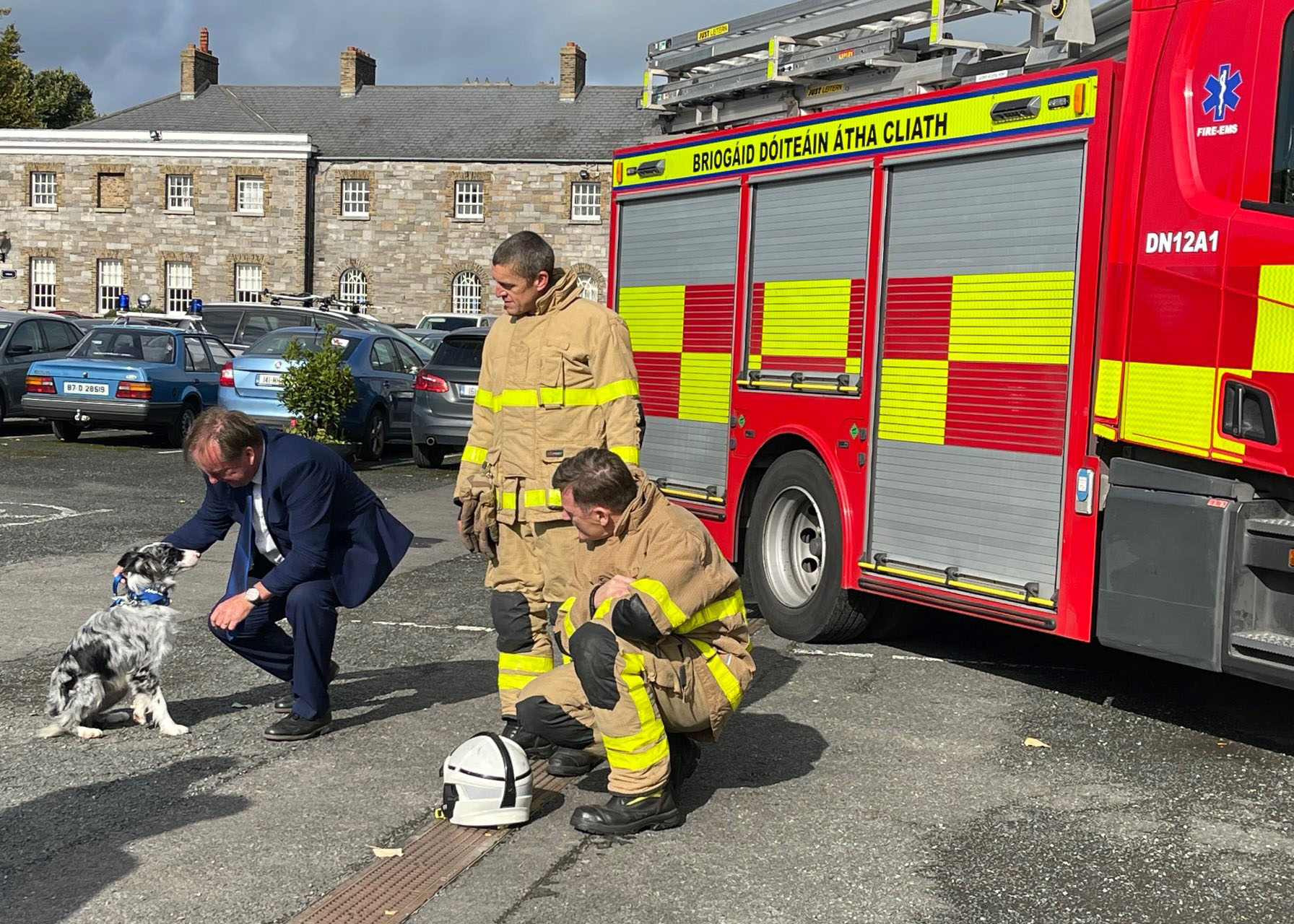 This year’s campaign emphasises the distressing impact the improper use of fireworks has on communities and both wild and domestic animals.

Speaking at the launch, Minister McEntee said: “The use of fireworks can cause fear and distress to elderly family members, neighbours, people with sensory challenges and other vulnerabilities.

This is without even considering the serious dangers associated with illegal firework use, and the damaging and life changing consequences these dangers can pose to not only those who directly use illegal fireworks, but also innocent bystanders to whom the improper use of fireworks can cause serious distress and injury.”

Incidents involving the use of illegal fireworks can be very impactful on communities across the country. This is a matter of serious concern in terms of ensuring the safety of communities, but particularly the health and safety of children, teenagers and older or more vulnerable people. In addition, animal welfare concerns were also an issue that has been repeatedly highlighted over recent years.

Minister McEntee welcomed the continued collaboration with the ISPCA, Dublin Fire Brigade, and An Garda Síochána.

The ongoing awareness campaign and associated advertisement campaign is aimed at the general public but particular attention is being given to targeting the younger generation and their parent’s as these groups are most likely to engage in the use of illegal fireworks.

The campaign messaging will feature on local radio stations across the country, as well as across social media, YouTube and Spotify, and will continue until early November. 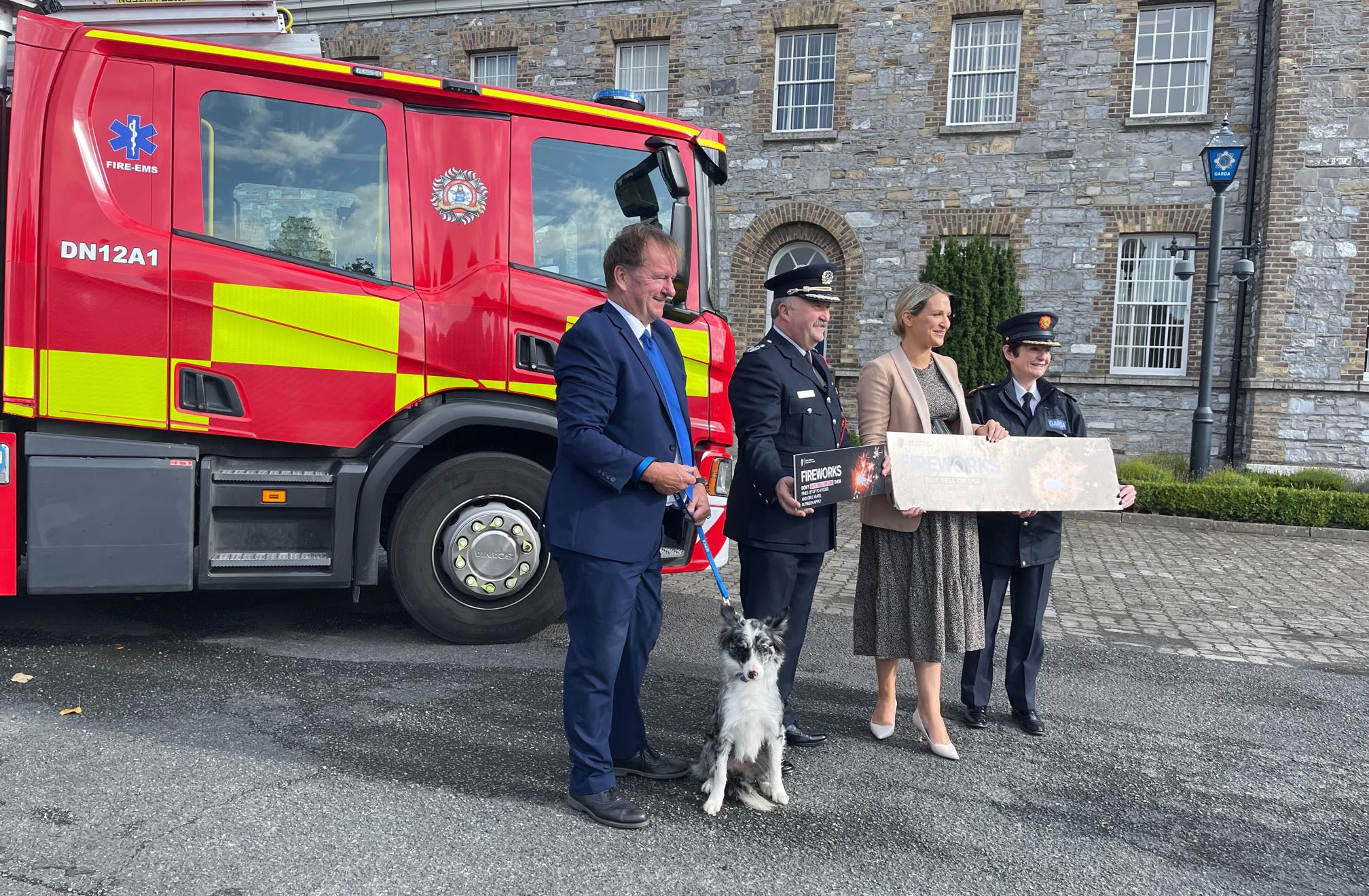 The Chief Executive Officer of the ISPCA, Dr Cyril Sullivan, also spoke about how Halloween can be a frightening and dangerous time for animals due to the use of illegal fireworks. Fireworks can cause significant distress for pets and other animals.

Dr Cyril Sullivan said: “Some pets can be terrified by the sound of fireworks, which can cause significant distress for our pets, and for other animals such as livestock and wildlife. The ISPCA is asking those considering the use of illegal fireworks, to please consider the affect it can have on animal welfare. We would also advise pet and animal owners to keep their pets indoors on Halloween night, if possible”. 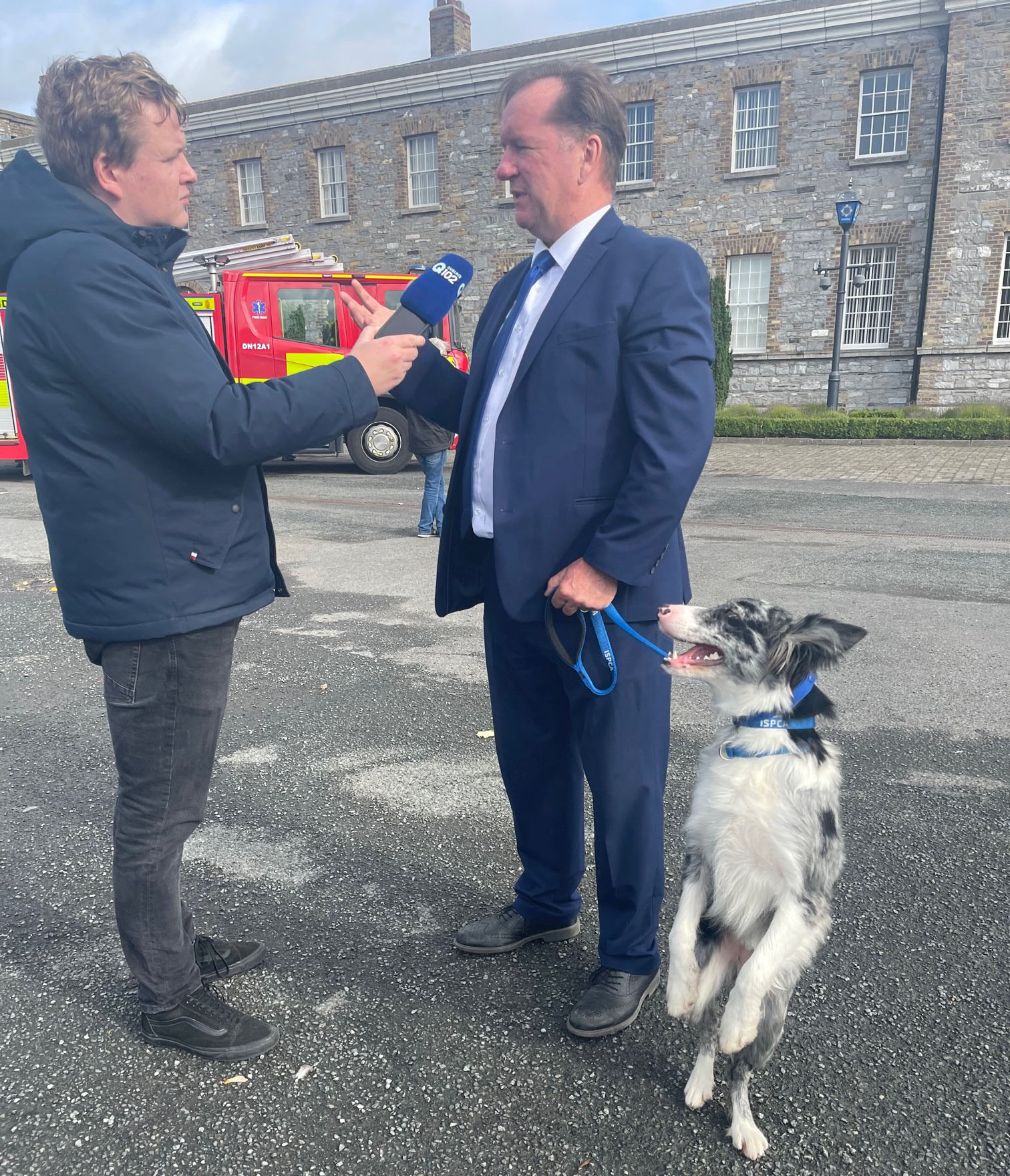 Minister McEntee also implored anyone tempted to use fireworks this Halloween to consider the dangers and consequences their actions may have on themselves and the wider community.

Minister McEntee continued: “Fireworks used illegally can have unintended and unexpected consequences — such as the loss of one’s sight or hand”.

"We are here today, so that we can continue to educate people and build awareness around the dangers of fireworks but also recognise that, through the experiences of others we can learn to prevent such incidences from happening again”.

"This year we are again asking people to consider those who are indirectly impacted by their actions over this Halloween period, what might be considered harmless fun for some, is terrifying for others. People must remember that there are serious penalties that can be imposed for the misuse of illegal fireworks.”

Dublin Fire Brigade’s, Acting Chief Fire Officer Michael O’Reilly and Assistant Chief Fire Officer Greg O’Dwyer both spoke about the dangers of using fireworks, the injuries that fireworks can cause to people and also to Firefighters in the course of their work. 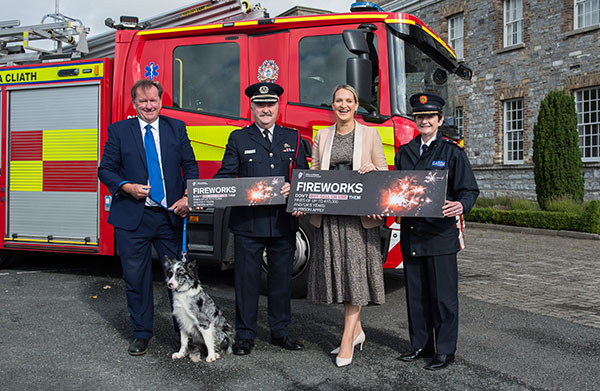 Assistant Chief Fire Officer Greg O’Dwyer commented: “Unfortunately over the years our Firefighters and Paramedics have had to deal with some horrific injuries caused by illegal fireworks, whether by them going off in some young person’s pocket, severely burning their leg, exploding in their hands, causing disfigurement to their fingers, or as projectiles from bonfires, striking them in the face. All of these potential injuries can and have been caused by illegal fireworks and all are life changing injuries, or worse. Fortunately we are seeing a decline in these type of injuries over the last few years, due mainly to the increase in the number of officially organised firework events, providing a fun environment for all to enjoy their evening in a safe and controlled manner. We urge all parents and young people to check the websites of their Local Authorities and Community Groups to seek out these safe and enjoyable events, so everyone can be safe and stay safe around the Halloween period.”

Representing An Garda Síochána at the event, Deputy Commissioner, Policing and Security, Anne Marie McMahon said about the challenges An Garda Síochána face at this time of year and the approaches and initiatives taken in keeping our communities safe; "Each year, many people including children suffer injuries caused by fireworks such as burns, loss of limbs and serious eye injuries. We are reminding the public that fireworks are both highly dangerous and illegal in Ireland except under licence.

“Aside from the obvious risk of life-altering injury, fireworks also cause anxiety for many residents in the community. If you are found in possession of fireworks Gardaí will confiscate them and you are liable to prosecution.

“We are asking for anyone with information related to the illegal use or sale of fireworks to contact their local Garda Station or the Garda Confidential Line on 1800 666 111.”

Commenting on the excellent work of An Garda Síochána, Minister McEntee recognised the work carried out by Operation Tombola, saying: “I am informed by the Garda Commissioner through Operation 'Tombola' each Garda Division has now put in place a range of measures to combat the importation, sale and distribution of illegal fireworks, through intelligence led operations, visits to local car boot sales, searches and seizures of fireworks. They will also liaise with local authorities and Fire Services, and identify and remove stockpiles of bonfire material and abandoned vehicles from locations.

The Minister concluded by emphasising that while Halloween can be a really enjoyable time we all must work together to ensure that everyone in our communities feels safe and unharmed during this exciting time of the year.