The donation of hay was organised by local Kilkea farmer Christian Greene who told the Kildare Nationalist that he was prompted to action by stories of horses and cattle sick and dying in fields around Ireland during the cold spell before Christmas through lack of food.

“Stories of animals who were suffering were coming back to me from all over the country, through the news and from friends of mine who I was talking, to so I went online and I emailed the ISPCA and explained that I was a farmer here in Kilkea and I was offering my help with a donation of feed or temporary housing or in any other way I could. “They were on to me the following day and they explained to me that they were seriously short of foodstuffs for animals. So it went from there.”

Christian got in touch with neighbouring farmers and he, along with his neighbours and friends, donated 32 round hay bales, three big square bales and nine coffin shaped small bales valued at over €2,000.

“The farmers who contributed were extremely generous and gave what they could and I want to sincerely thank them for that. I then had the problem of how to transport the bales to Longford and I contacted a man called Mick Malone who I was told had a lorry. I told Mick what I was doing and without hesitation he readily agreed to transport the bales to Longford free of charge which I feel was an outstanding act of generosity on his part.”

The donation and delivery of hay from Christian Greene and the local farmers in Kilkea and the surrounding areas will help the ISPCA to feed the horses that they care for during the current severe conditions. At all times they have between 45 and 60 horses in their centres in Longford and Mallow. 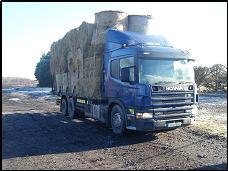 The chief executive of the ISPCA Noel Griffin said that donations like that of the Kilkea farmers are a huge help to his organisation. “We would like to encourage anyone who may wish to be of assistance in any way to please come forward and get in contact with us. You can do this through our website http://www.ispca.ie or by calling our head office on 043 3325035. We are currently seeking any unwanted round feeders. Your help is very much appreciated.”