The ISPCA is seeking new homes for a number of dogs rescued from deplorable conditions in Co. Laois. A total of 14 dogs, including Lurchers, Terriers and a German Shepherd, were removed from a premises in Portarlington last week.

Gardai, Animal Welfare Inspectors and the local Dog Warden discovered the dogs living in filthy pens and with no access to water in warm, dry weather conditions. In addition to the shocking living conditions, some dogs were severely underweight while others had injuries and scars.

ISPCA Inspector Brendan Hughes commented “Some of these dogs were in a truly dreadful condition. A white German Shepherd was skin and bone, crawling with fleas and was missing the tip on one of its ears. A white Terrier was covered with scars and there was a Staffordshire Bull Terrier with a huge chunk taken out of its upper lip”.

The dogs were surrendered to the care of the ISPCA and taken to one of the society’s rehabilitation facilities where they have been receiving specialist care. It is hoped that they will all make a full recovery and be available for rehoming in the coming weeks.

An investigation is continuing and all the ISPCA’s findings will be submitted to the Gardai. 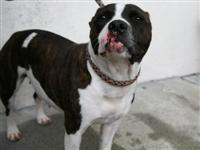