The ISPCA is urging pet owners to spay or neuter their cats and kittens as early as possible to prevent accidental and unwanted litters.

Many ISPCA rescued cats are left behind when their owners moved house or were no longer willing to look after them. In other cases cats and kittens were dumped, lost or their owners had sadly passed away. In some cases, cats were starving and scavenging to survive trying to feed their newborn kittens.  Sadly their offspring becomes feral, not having any human interaction and as they will continue to multiply unless we can stop the cycle.

With an estimated 200,000 feral cats indiscriminately breeding, the overpopulation problem is a serious welfare concern in Ireland, as feral cats continue to breed across the country. Many of these cats are sick and become injured due to fighting. The ISPCA is encouraging members of the public who are in contact with a feral cat colony to take part in a community initiative and Trap, Neuter, and Return (TNR) to tackle the issue and reduce the cat overpopulation problem in their area. 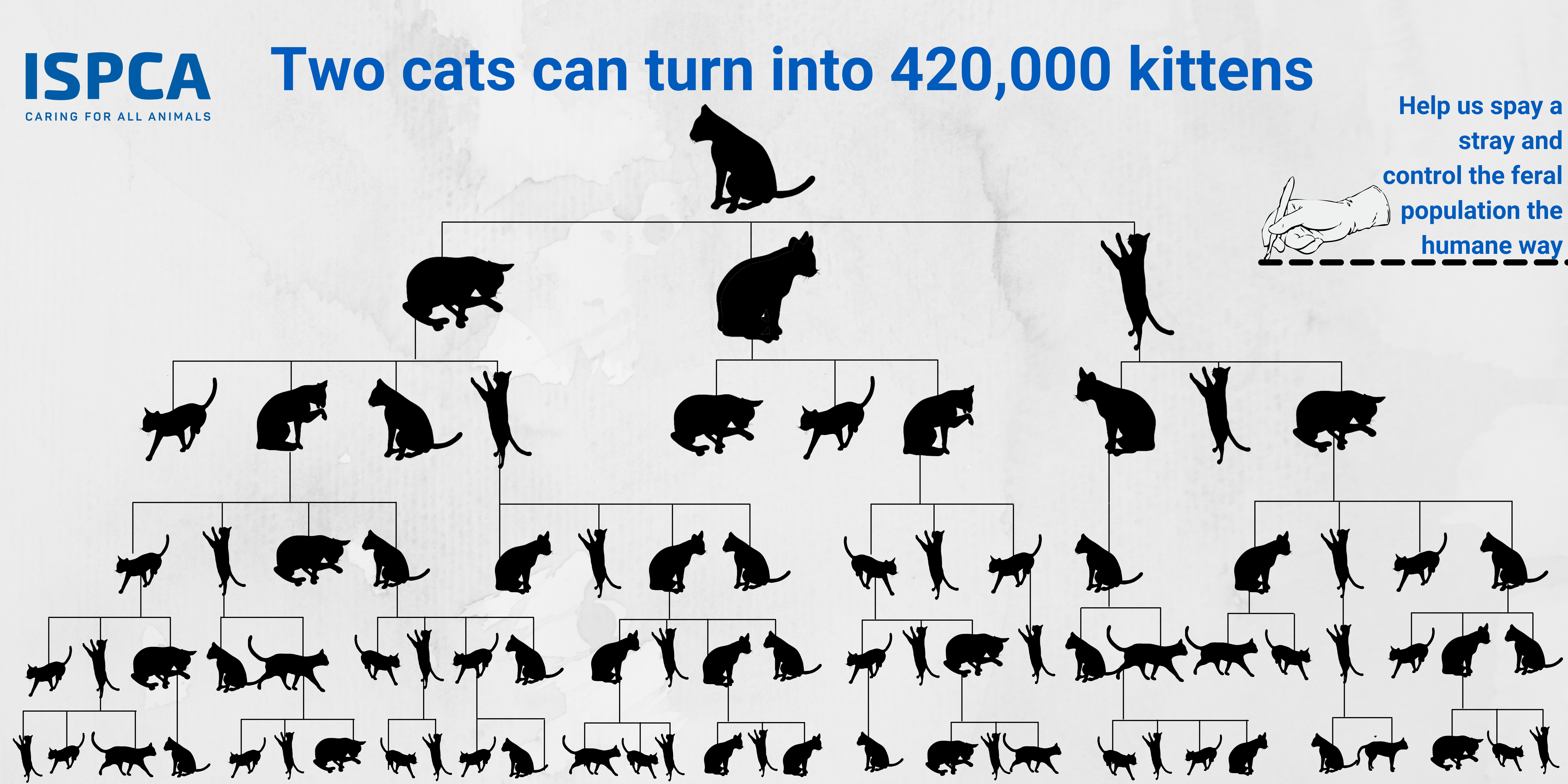 Kittens can become active at young as 16 weeks old and they can have as many as three litters per year. By having cats and kittens neutered and spayed (when of age) it will prevent accidental litters of kittens from being born.

In nearly all cases, spaying and neutering have overwhelmingly positive benefits:

This is George and Ringo: 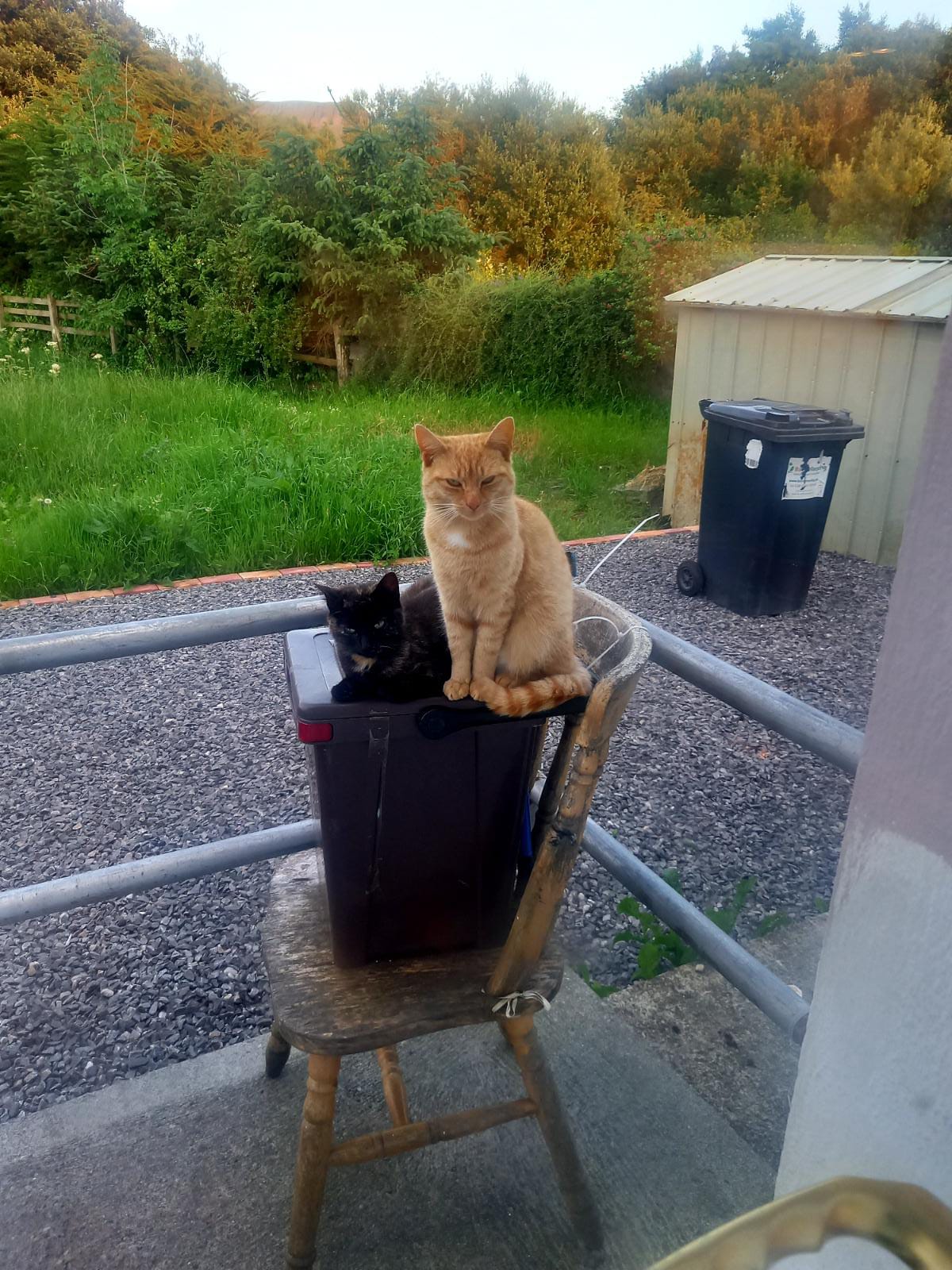 During lockdown last year, a cat joined a garden in Co. Sligo and made it her new home. The cat was feral and had no interaction with humans and was keeping her distance from the family. The cat, later called Dorothy, was very hungry and her new human John began to feed her. It became obvious shortly after that she was pregnant and she made a cosy bed in a nearby shed.

She had two little kittens, called George and Ringo (pictured above before being neutered) who quickly adapted to seeing John on a daily basis. A couple of months later when the kittens were nearly weaned, their mother went missing, but George and Ringo stayed and although now semi-feral, they began to tolerate the odd pat and scratch when there was food involved.

John’s partner contacted a local vet about getting them neutered.  Once captured, George and Ringo were neutered along with getting them vaccinated, microchipped, treated for parasites along with a full health check. They live happily outside and sleep in the nearby warm shed with full bellies, and they do a great job at keeping the mice away!

John and his family often wonder what became of Dorothy. Hopefully, she set up home with another family who got her spayed to prevent future litters of feral kittens.

The charity is urging the public to consider the positive benefits of getting their cats and kittens spayed or neutered and is encouraging animal lovers to talk to their vet as soon as possible to get this simple procedure done.

The ISPCA also encourages all cat owners to microchip their cats in the event that they get lost, as this is universally recognised as the best way to make your pet permanently identifiable. Cats are known to hide in vehicles and can end up far from home. Having your cat microchipped is the best option to be reunited with your beloved pet should this happen.

The ISPCA and our affiliated member societies also provide support for members of the public looking to undertake TNR in their areas, as do a number of other organisations around the country to contact their local animal rescue group and veterinary practice for information.