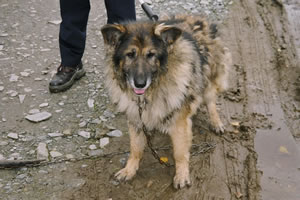 ISPCA Inspector Kevin McGinley responded to a complaint from a concerned member of the public on Monday 12th November last year and discovered the dog tied to a mobile home belonging to the accused in Manorcunningham, Co. Donegal.

The dog appeared neglected to Inspector McGinley with a matted coat and no food, water or shelter. The Inspector noticed a strong odour emanating from the dog and observed a green fluid coming from its ears. It was subsequently found that both of its ears were severely infected and discharging puss.

The accused initially denied ownership of the dog claiming that it was a stray. The German Shepherd, since named Max by ISPCA animal care staff, was treated at a local veterinary practice for almost two weeks before being taken to the National Animal Centre in Co. Longford. Max made a full recovery and was rehomed with a new family.

Judge Kilrane fined the accused €200 and banned him from owning or keeping canines for the remainder of his life.

Mr. McGinley said "We are very pleased with the outcome of this case, particularly with the ban on keeping dogs that was imposed. Pet owners should be vigilant for any health problems their pets may develop and must act promptly and appropriately to alleviate such ailments."