At Youghal District Court, on October 15th 2021, a man with an address in Killeagh, Co Cork, pleaded guilty to two counts under section 12 of the Animal Health and Welfare Act 2013 (AHWA).

He was disqualified from keeping equines for five years and ordered to pay €3,000 to the ISPCA.

The case related to a visit made by ISPCA Inspector Alice Lacey to a location in Clashmore, Co. Waterford on Tuesday 2nd June 2020, in response to a report about two ponies in a field. 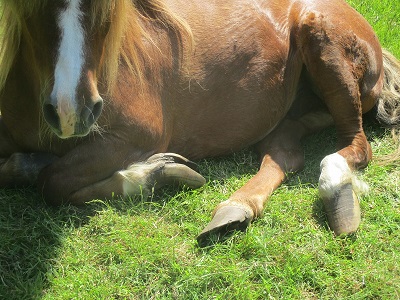 Upon arrival, it was immediately obvious that one of the ponies, a Chestnut male which was lying down, was in distress. He was overweight and his hooves were horrifically overgrown. He struggled to get to his feet and, when he eventually managed to stand up, he was very unsteady and unable to bear weight on his left front leg. The second pony, a grey dun female, also had very overgrown hooves and was very overweight. 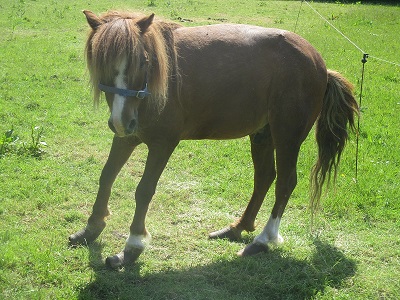 Both ponies were immediately removed to the ISPCA Equine Rescue Centre in Mallow for an urgent veterinary assessment.

Upon examination, the female pony, later called Bumble, was estimated to be about 18 years of age. She was found by the vet to be morbidly obese and suffering from laminitis. 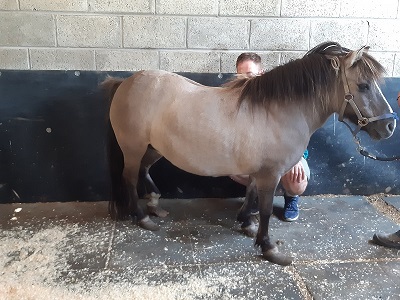 All four hooves were overgrown and it was evident that hoof care had been severely neglected. The pony was also suffering from sweet itch, an inflammatory condition of the skin.

The male chestnut pony was estimated to be 8 years old. He was extremely lame and obese. On closer inspection, an open wound that was infested with maggots was found inside the cavity of the hoof.

X-rays of the front two limbs confirmed that there was a severe rotation of the pedal bone in the hoof indicating that the pony had been suffering from laminitis over a prolonged period of time. Sadly, on veterinary advice, he was euthanised to prevent further suffering. 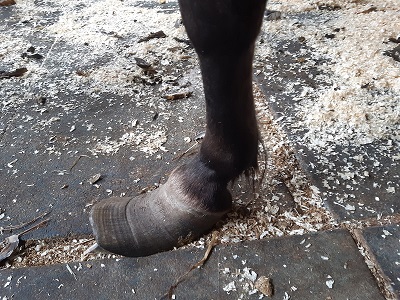 Following urgent farrier care and a strict diet in ISPCA care, Bumble made a full recovery and was later rehomed.

ISPCA Inspector Alice Lacey said: “These two ponies had suffered needlessly and it was really distressing to see the level of neglect they would have endured over a prolonged period of time. They would have been in severe pain with every step they took, which could have totally been prevented, with proper animal husbandry and care. Owners have a legal and moral obligation to provide for the animals in their care. In this case, there was a complete failure and lack of action to address these issues which, in turn, led to the prolonged and unnecessary suffering of both ponies.  Turning a blind eye to such issues will simply not be tolerated”.

On imposing the disqualification Judge Brian O’Shea commented “The most aggravating factor, in this case, is the significant neglect of these two animals – it’s outrageous in fact. The accused bought these animals, knew very little and simply neglected them. I am making a disqualification for five years from owning any equines, and a cost of €3,000 to be paid to the ISPCA’s Equine Rescue in Mallow”.

He adjourned that matter until June 3rd 2022 indicating that, if the accused failed to pay the costs by that time, he would convict, fine €1,000 and impose a two month custodial sentence.

Alice added: “Regular hoof trimming by a qualified farrier is recommended every six to eight weeks which would also identify any hoof problems and correct any issues along with good dietary management. If owners are unable to look after their animals responsibly, then they shouldn’t have them, it’s that simple”.

The ISPCA works in collaboration with our affiliated member organisation Waterford SPCA. Without this vital logistical support, the ISPCA would not be able to operate effectively in the Waterford area.

This case was prosecuted by the Minister for Agriculture, Food and the Marine (DAFM), and it highlights the impact of collaboration with DAFM that we are having on the animals who need us the most.

Please continue to report any animal welfare concerns to the ISPCA online here https://www.ispca.ie/cruelty_complaint or by calling us on 0818 515 515 or emailing helpline@ispca.ie to help us prevent cruelty to all animals.